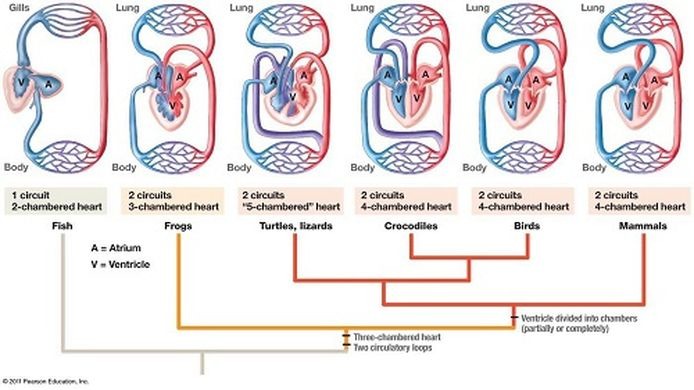 Let me clear something first heart that I am discussing today is different from the valentines heart. We will talk about real the heart, i.e. a pumping machine responsible for circulation.

Different species have different types of hearts. Some have one while some have many. Some can row a heart if the first one fails and some do not even need one.

Among these questions, there is a popular myth that a cow has four hearts? If you also believe then stay with us till the end.

The heart is a body organ responsible for transporting blood throughout the body. It is a vital organ that helps in the transportation of oxygen in the body.

The blood carries oxygen and other nutrients to various parts of the body. In addition, metabolic waste and carbon dioxide to the lungs.

Fishes have two-chambered hearts. An atrium and a ventricle to stored oxygenated and deoxygenated blood. A whale has a heart weighing around 430 kg. It is the size of a small car. Well, this is justified as to circulate blood in a body equivalent to two buses needs a small car-sized heart.

Fairyflies have a tiny heart that is not visible to the naked eyes.

Zebrafish has a regenerative heart, which heals and regenerates itself to a fully functional one.

Animals with more than one heart

Octopus has three hearts, one to pump their blood and the other two to pump blood to their gills. Similarly, squids also have three hearts.

Yes, do not get surprised, a horse has one heart with four hearts like organs. At the bottom of each foot, there is a special organ known as the frog. This frog acts as a blood reservoir.

Earthworms do not need a heart. They have 5 pseudo-hearts that squeeze vessels to circulate blood. Moreover, oxygen is absorbed by his skin.

Do Cows Have Four Hearts?

A cow does not have four hearts or four stomachs. Instead, they have a four-chambered stomach.

Four chambered Stomach of a Cow

A cow does not chew its food thoroughly. This food gets collected in the rumen. It breaks down hard foods like grass by mixing them with microbes, enzymes, and digestive juices.

Then it passes to the next chamber reticulum. This chamber is also called a honeycomb due to its structure. It traps all kinds of unwanted materials.

Moreover, here the food mixes with the salvia to form cud. The cows regurgitate this cud and chew them properly. Then the food goes back in Rumen and then reticulum.

In this reticulum, the food is broken even into smaller bits and passed to the third chamber.

The omasum further breaks down the food and separates it from water.

Finally, the next abomasum’s final digestion takes place. Here essential nutrients are absorbed and excess is sent through the intestines.

So was it an interesting hearty article? Different animals have their unique heart but one thing remains the same. A heart is a muscular organ responsible for blood circulation.

Moreover, next time you see a cow remember to feed it as it has four stomachs to fill in.

Difference Between the Scrum Master and the Product Owner

How Soft Skills are Key to Good Leadership?