Image by Kai Pilger from Pexels

Great managers understand the importance of recognizing employees’ efforts and contributions in the workplace. Feeling appreciated is one of the major reasons good employees stay in an organization. It boosts morale and helps organizations build strong internal relationships. On the other hand, being underappreciated can be costly to a business’s productivity in more ways than one.

Here are important employee statistics that establish how vital employee recognition is to businesses.

All of these support the idea that it’s in the organization’s best interest to keep its employees feeling appreciated and acknowledged.

Thankfully, there are plenty of ways to implement an effective employee recognition system, even for small businesses that don’t have much budget. But if you want a formal way of showing genuine appreciation to an employee who goes above and beyond, you can never go wrong with a personalized award plaque.

The History of Plaques

Giving out trophies is not a modern tradition. They have been widely used in ancient Greece and throughout the Roman empire. The word trophy comes from the Greek word tropaion, which means a monument erected to memorialize victory in battle decorated with a piece of armor or item collected from a defeated enemy.

In the early days of the Greek Olympics, the winners were crowned with laurel wreaths, while victors of local games received awards, like a bronze shield, a silver cup, and a tripod vase.

In the middle ages, the tradition of giving out chalice cups as a form of award began and is still popular today.

The easy availability of new materials and different crafting methods have made it easier and cheaper to give out trophies in the 21st century. And while the design of the awards themselves has evolved, the purpose and value of the tradition are well preserved.

Engraved plaques are one of the most common variations of the traditional trophy and are widely used in corporate culture for many reasons. 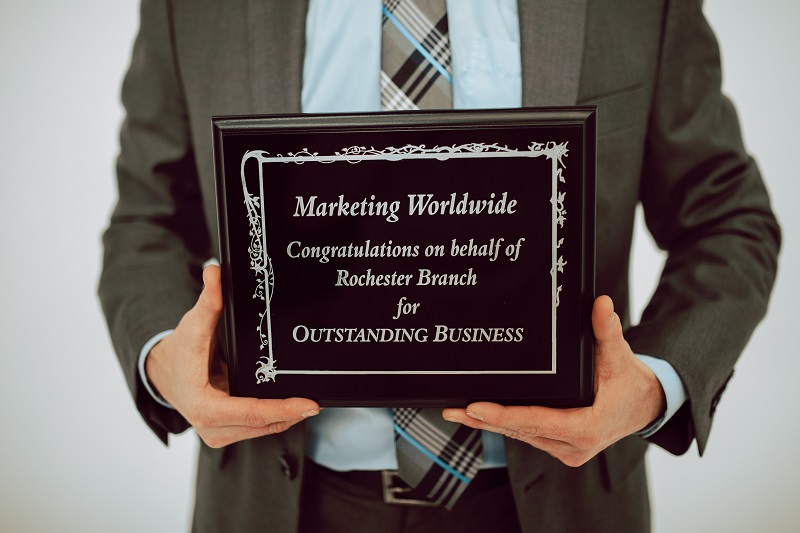 Image by RODNAE Productions from Pexels

Why Use Plaques as Corporate Gifts

Trophies often denote competition, which isn’t fitting for recognizing the achievements of particular employees. On the other hand, a certificate is often not enough to convey the proper depth of gratitude they deserve.

An engraved plaque accords the benefits of both—showy but not sensational—and the custom elements help communicate the special message of appreciation.

Just like certificates, you can engrave the recipient’s name on a plaque along with their achievements. But it’s not the ceiling for how many ways plaques can be customized. Some plaques can even be embedded with other functional details like a clock, so they also serve a practical purpose.

When it comes to customizing plaques, the sky’s the limit. If you can think of it, it can be made. You can have a customized plaque made of wood, glass, metal, or plastic. Advanced assembly methods and material availability have made it possible today to design a plaque in any shape or form for any function or occasion.

Some companies design their own plaques to reflect their branding and develop the award itself into a symbol of reputation and prestige in their field. Some hold award events to especially recognize phenomenal talents. This shows the creative ways organizations can use awards to motivate employees while promoting brand awareness.

Achievements are something to be proud of, and that’s why awards shouldn’t be tucked away in a drawer. Instead, they should be proudly displayed as a reminder of one’s hard work and personal milestones.

An engraved plaque is one of those awards that deserves showing off. A proudly displayed plaque serves as a sentimental keepsake and a constant token that reminds your best employees how much they are valued.

Giving out trophies and awards is a time-honored tradition for recognizing achievement. In a formal setting such as the workplace, such a tradition will never go out of style. Many companies might have experimented with different ways to reward top-performing employees. Still, nothing will remain as classy, straightforward, and genuine as handing out a long-established symbol of excellence to honor merit and hard work.

How to start Mechanical Design Company?

ISO 27001: Everything from What & Why to know about Certification