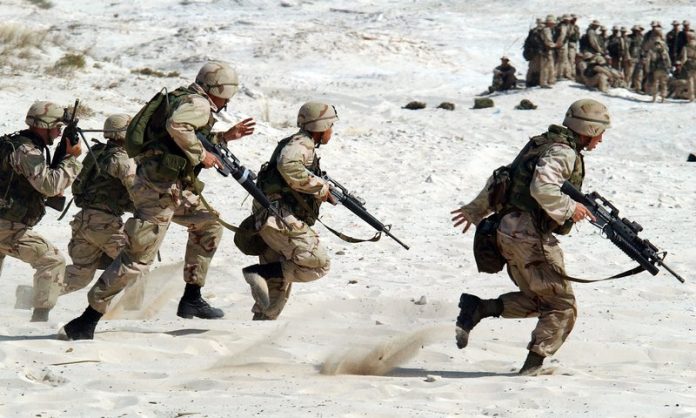 WHO CAN DECLARE A WAR IN INDIA?

The President of the Republic of India is the Supreme Commander of the Indian Armed Forces. The President has the authority to declare war or make peace on the advice of the Union Council of Ministers, which is chaired by the Prime Minister. With a few exceptions, all of the executive functions granted in the president are, in reality, exercised by the Prime Minister with the support of the Council of Ministers, according to Article 53 of the constitution. The president is required under the constitution to follow the prime minister’s and cabinets advise as long as it does not violate the constitution.

WHAT IS THE POSITION IN THE US?

The exclusive authority to declare war is granted by the Constitution to Congress. Congress declared war on 11 times, including its first declaration of war against the United Kingdom in 1812. During World War II, Congress issued its final official declaration of war

5 WARS FOUGHT BY INDIA AFTER INDEPENDENCE

The Indo-Pakistani War of 1947–1948, also known as the First Kashmir War, was fought between India and Pakistan over the princely state of Jammu and Kashmir from 1947 to 1948. It was the first of four wars waged between the newly independent states of India and Pakistan. Pakistan started the conflict a few weeks after its independence by dispatching tribal lashkar (militias) from Waziristan in an attempt to conquer Kashmir and prevent its ruler from joining India. The war’s indecisive outcome continues to have an impact on both nations’ geopolitics.

The Sino-Indian War, which lasted from October to November 1962, was fought between China and India. The major reason for the war was a disagreement over the Himalayan boundary. Following the 1959 Tibetan uprising, when India gave shelter to the Dalai Lama, the two nations engaged in a series of deadly border clashes. To thwart Chinese military patrols and logistics, India began a defensive Forward Policy in 1960, establishing outposts along the border, including many norths of the McMahon Line, the eastern section of the Line of Actual Control declared by Chinese Premier Zhou Enlai in 1959. [15]

The second confrontation between India and Pakistan over the sovereignty of the state of Jammu and Kashmir occurred in 1965. The conflict did not end the dispute, but it did engage the US and the Soviet Union in ways that would have far-reaching consequences for future superpower engagement in the area. Conflict erupted again in early 1965, when Pakistani and Indian soldiers battled over disputed territory along the two countries’ border. When the Pakistani Army sought to capture Kashmir by force in August, tensions escalated. The effort to take the state failed, and the second India-Pakistan War came to a halt. This time, the character of the fight was influenced by Cold War international politics.

Following the partition, the East Wing of Bengal became East Pakistan, with around 1200 miles of Indian territory between the two halves of Pakistan. Furthermore, Pakistan’s military administration paid little attention to East Pakistan, and Urdu was forced on it. The rejection of the Premiership to Sheikh Mujibur Rehman of East Bengal, whose party had won 160 out of 300 seats in the 1970 elections, was the immediate subject of contention. East Bengal was denied rights by Pakistani leaders Z.A Bhutto and Yahya Khan.

When Pakistan attacked Indian airfields in Kashmir, India launched counter-attacks against both East and West Pakistan. The eastern half was controlled by India, which proclaimed independence as Bangladesh on December 6, 1971. In 1972, both nations agreed to a cease-fire, and Z.A Bhutto became the leader of Pakistan, while Mujibur Rehman became the first President of Bangladesh. Negotiations between Indian Prime Minister Indira Gandhi and Pakistani President Z. A. Bhutto resulted in the signing of the Shimla Agreement in June 1972, which restored peace and order between the two countries. India was to seek peaceful solutions to conflicts and concerns via bilateral dialogue, and neither India nor Pakistan were to change the current status unilaterally.

The Kargil War, also known as the Kargil war, was a military confrontation conducted between India and Pakistan in the Kargil area of Jammu and Kashmir and elsewhere along the Line of Control from May to July 1999. (LoC). In India, the battle is also known as Operation Vijay, the name of the Indian military operation that cleared up the Kargil area. During the conflict, the Indian Air Force worked with Indian Army ground troops to clear out regular and irregular Pakistan Army soldiers from evacuated Indian positions along the Line of control. Operation Safed Sagar was a code name for this operation, that made a name in history.