There are four types of states of matter. Solid, liquid, gas, and plasma. Some elements exist in solids, such as metals. Some are liquid such as h2o, mercury, and some a present in a gaseous state such as oxygen, hydrogen. There is another matter known as plasma, but we cannot find it on earth. 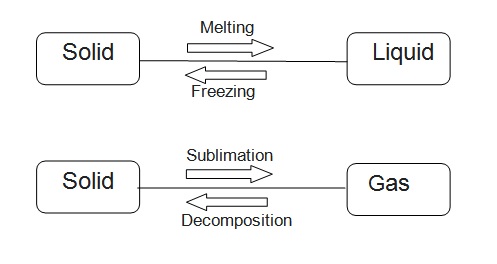 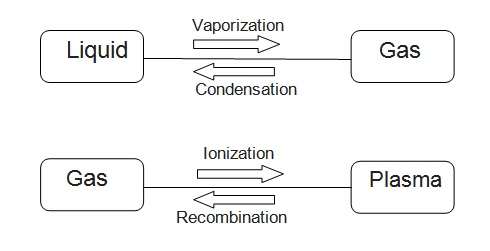 Solid is a state of matter that has a fixed shape and volume. The molecules are closely packed.

Liquid has loosely packed molecules. It acquires the shape of the vessel it is pouring in. Moreover, it has a fixed volume.

Gas is one of the four states of matter, including solid, liquid, and plasma. A gas can be made up of individual atoms, element molecules, and compound molecules.

Air is a mixture of different gases. Atoms of gases are loosely connected.

Difference between Solid, Liquid, and Gas

A solid has a fixed shape and cannot be easily changed. For example, a stone won’t change its shape easily.

On the other hand, liquid and as takes the shape of the containers.

Solid and liquid have a fixed volume. For example, stone or water will have the same volume no matter in which container it is.

While a gas has a variable volume, air can occupy a room, box, or even a small balloon.

The densities of gases are lower than those of liquids and solids. Moreover, it changes with the temperature change.

What are the Elements that exist as Liquids at Room Temperature?

Two elements are liquid at room temperature: Mercury and Bromine.

At room temperature, exposed elemental mercury can evaporate to become an invisible, odorless toxic vapor. It is a shiny and silvery metallic liquid. It has a melting point of -38 degrees Celsius and a boiling point of 356 degrees Celsius.

Cesium is a pale gold element, and it melts at body temperature. Its melting point is 28.5 °C ad boiling point is 671 °C.

Gallium is a soft, silver-colored metal when solid. It turns liquid at room temperature. When liquid, it looks silvery white. Its melting point is 29 °C ad boiling point is 2400 °C.

Rubidium is a soft silvery element. It belongs to the alkali metal group. Its melting point is 39 °C ad boiling point is 696 °C.

What are the Elements that exist as Gases at Room Temperature?

All of the matter around us is any of these three forms: Solid, Liquid, and Gas. One of the most common substances demonstrating the interrelation between them is water.

Remember you use ice, water, and steam. These three demonstrate three forms of matter.

Role of RRBs in the Rural Economy