Culture and heritage are an integral part of any nation’s history. They are developed as the centuries pass. Every generation inherits its core heritage values and cultural customs. Every culture has its own legends. People praise and pray to gods as described in their own mythology for their protection and happiness. People grasp insights from their life story and their teachings and observe different gods prominent for different aspects. Of all cultures, customs, and mythology, Greek has a special position for them. It revolves around elements like human life, the creation of the world, knowledge, and abstract subjects like the environment. Greek mythology has defined God as normal people who lived centuries back, but people always have a special position for them. Greek gods represent almost everything like love, anger, truth, knowledge, etc. Zeus is the leader of all gods in Greek which he represents and takes charge of rain and sky, which describes Greek mythology. The teachings and assumed figures of gods are sculptured on public buildings they had temples for praising different gods. God’s teachings and their characteristics are well written in scripts later. The scripts about gods described that a god can determine rule one’s destiny and interfere favorably or other in human’s life they pursue adventures and have immense qualities. As said earlier, Greek gods represent almost everything. Knowledge and Truth are two among them.

Apollo: The god of knowledge and intellect 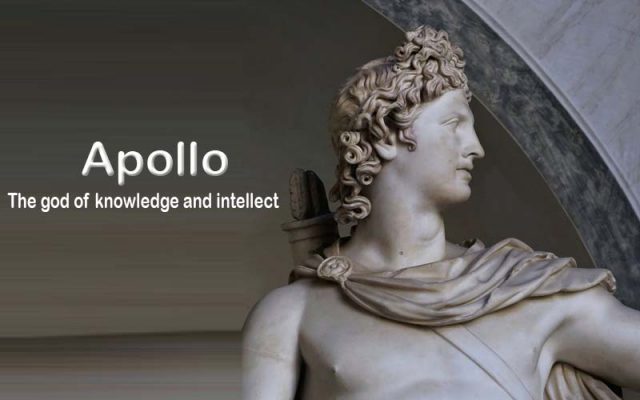 Greek mythology describes the origin of Apollo as “He was the son of Zeus and Leto and brother of Artemis, who represents hunt.” Apollo is treated as the most complex of all gods and he has been recognized for archery, music, dance, intellect, and knowledge. People believe that Apollo is the god who offers help and keeps off evil away from them. Apollo’s physical form as described by Greek mythology is “He carries a golden bow and silver arrows and haves a long hair” and it is also said that the cred of the invention of archery goes to Apollo as per the Greek mythology. Many believe that Apollo has made people recover out from epidemics but also says that Apollo himself could bring ill-health to people using his arrows. He is also concerned with people’s health and education. He represents growth in youth and adulthood. One of his primary duties is said that “He is responsible for taking care of shepherds, flocks and protecting crops from pests.” He is also observed as the giver of laws. People refer to his teachings and oracles before setting up laws. Apollo is also concerned with developing of the civil constitution and the establishment of towns. Being young, Apollo has learned the art of building and it is said that guided people to build new cities. He also encourages music and poetry; Apollo is seen as the inventor of string music. During the 5th century, Greeks identified Apollo as the personification of the sun. He is praised and prayed all over Greece he has many temples dedicated in Greece colonies. Most Apollos’ temples were decorated with sculptures that represent the evolution of Greek architecture which are of mathematical forms.

Veritas: The goddess of truth

In human life, being truth and truthful has been noted as maintaining high esteem. Veritas is actually the name given by Romans and they believe that it was one of the main virtues people of roman should possess. The name of the goddess itself represents being an ideal. Being true is considered as being ideal by people around the world. It is believed by the people of Greece that she hides under a sacred well. Many international universities and colleges have set up “Veritas” as their motto promoting their idea of being ideal. Coming to the historical origin of Veritas, the goddess of truth as described by Greek mythology, she is seen as the daughter of Saturn and some also say that she is the daughter of Jupiter. Greeks see Veritas as an elusive woman. She is described as a virgin dressed in white holding a mirror in mythology books of Greek. Veritas being the goddess of truth promotes the idea of being true to her people. It is believed that people being under prayers of veritas, never subjected to speaking lye. People also believe that she has the agility and consistent cat-like speed. Veritas has also the capability of knocking down their enemies in one strike. It is also said that she impacts and regulates people’s behavior.