The universe of JoJo’s Bizarre Adventure reflects the real world with the added existence of supernatural forces and beings. In this setting, some people can transform their inner spiritual power into a Stand, and another significant form of energy is Hamon. This martial arts technique allows its user to focus bodily energy on sunlight via controlled breathing. The narrative of JoJo’s Bizarre Adventure is split into parts with independent stories and different characters.

Diavolo is a veritably tall man in his 30’s with a lean and semi-muscular build. In his first appearance, covered in shadow in all but his glaring eyes, he appears to have short, combed back straight hair and is wearing a suit and tie.

His appearance is drastically altered when fully revealed: Diavolo has long hair, leopard-patterned with various spots, parted in a zig-zagging manner; the bangs of which are propped and parted slightly to the side. The rest of his hair is cut straight across at his shoulders. In earlier depictions, varying amounts of Diavolo’s hair were cut straight, inconsistently ranging from small locks to the entirety of his hair. His shirt, hidden under Doppio’s sweater, appears to be made of complex mesh-wiring: it covers his shoulders and torso, but down his back and abdomen are linked circles tucked under his belt, which in the back end in two~three long “coattails”. On his arms are elegantly designed floral sleeves leading down to a pair of wristbands. He also shares a pair of studded pants and seemingly sock-less loafers with Doppio. In most of his appearances, Diavolo has a slightly hunched posture when standing.

His eyes are unique as his irises are “fragmented”, forming as spots and shards of whole irides with a triangular-shaped highlight to them. However, while Bucciarati is in control of his body, they become normal with circular highlights.

His appearance differs greatly while operating as his alter-ego, Doppio. Doppio is a completely separate soul sharing a body with Diavolo, and they even have different muscular builds.

Doppio appears as a fairly slim yet fit young man (described as having a person’s physique in their late teens or early 20s). He has freckles, contributing to his boyish looks, and light-colored irises that disappear when he is not in control of the body. His hair is tied into a neck-length ponytail by a weave-like braid; the front hair is left loose and sweeps over to one side lock, the position and length of which is portrayed inconsistently. 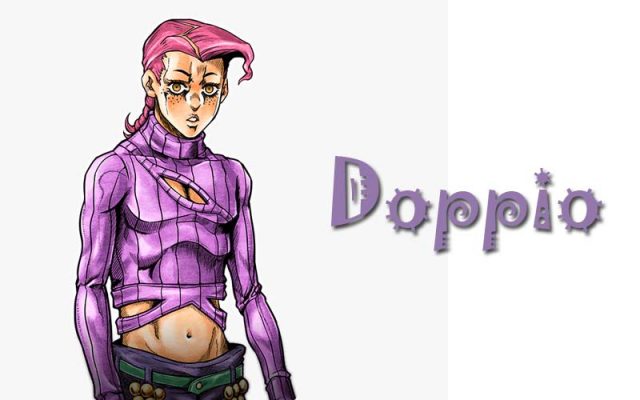 His clothing consists of a light-colored sweater with gash-like openings that leave the midriff exposed and a loose pair of jeans with studs covering the thighs and sides of the ankles. Doppio also wears a black mesh shirt underneath the sweater. Doppio is friendly, honest, and a bit cowardly. He regularly hallucinates random objects as “phones” with which he talks with his alter-ego, not knowing that they share the same body.

Doppio mostly behaves like a good-natured person and is by default a friendly and polite individual. Doppio frequently seems good with children as he once successfully borrowed a toy phone from a child while taking a plane and even risked his life to save another one. However, whenever attacked, Doppio automatically reverts to a state of true fear and submission, often choosing the safest option, such as comply with his aggressor’s demands. He believes himself to be unlucky, which provides an ironic contrast to Diavolo’s good fortune.

Fiercely loyal to his boss to the point of attempting to fulfil the mission first and foremost, Doppio is somewhat resourceful, although Diavolo has to help and counsel him from time to time. Despite this, though, bits of Diavolo is in Doppio.

Doppio was the first one born because Diavolo is just the half counterpart of Doppio, Doppio is also Trish’s father, Idk why Diavolo says “Doppio oh my doppio”. Excuse me? Doppio was born first, and then as he grew up, he developed an alternate personality, “Diavolo” And then Diavolo took over everything.

So Doppio was born first, and Diavolo was born as an alternate personality even though Doppio thinks “He’s” a boss. While Doppio never learned the truth between themselves, he highly respects Diavolo and always called him “Boss” – though, whether or not Doppio knew Diavolo’s name is unknown.

Doppio also seems to be Diavolo’s gopher, something he takes pride in considering how loyal he was to the point of stubbornness, and he seemed to heed most of Diavolo’s orders when he remembered them. Both of these characters have a mutual dislike for each other. Risotto dislikes Doppio because he is connected to “the boss” and vice versa. After all, Risotto is looking for the boss. As Risotto continues to try to kill Doppio, this dislike grows to the point that Doppio is willing to risk his own life for a chance to kill Risotto

Also Read: Who would win in a Battle between Darth Nihilus and Sauron?