You can call him by any name. The glory of Lord Shiva is immeasurable. Different from every other Hindu god, he is Lord Shiva. His unique appearance is most noticeable.

Unlike other Hindu gods, Lord Shiva is not decorated with silk robes, old jewellery, beautiful garlands, and crowns. He is known to be a Vairaagi. His appearance is unique. 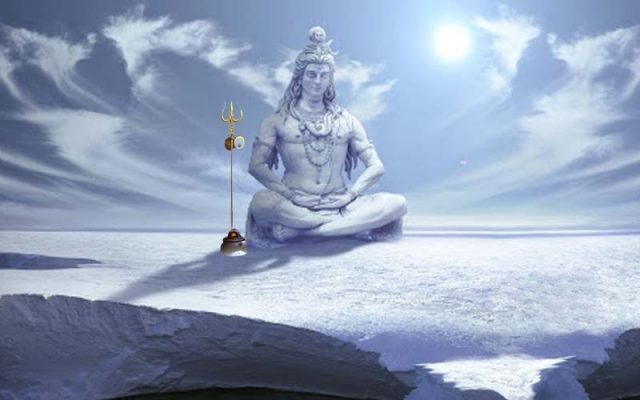 He has a blue neck, and is all covered in bhasm,

Hairs are interwoven into jatta, amidst it River Ganga is flowing,

His forehead is decorated with the bright crescent moon,

He wears a garland of skulls and rudraksha, and has a serpent around his neck,

He wears a tiger skin and holds a Trishul with Damru.

His appearance lets everyone in strange awe. However, this is weird in worldly customs. But he looks charming and sweet.

Well, this is an interesting story…Want to hear it?

Lord Shiva is ignorant of the Worldly customs and generally lives in his world.

Lord Shiva used to wander naked in the forest immersed in himself. Once he entered a Village where Saints used to reside with his family.

Lord Shiva is the representation of porush. His physical appearance is beyond comparison. The women of the village were attracted to this young Saint.

Hearing about this distraction among the wife’s and daughters of the saints, they become furious. They were angry with the Man who is moving naked in their village causing trouble.

They mutually decided to teach this young man a lesson. Then they dug out a deep pit on Shiva’s path. Unknown to the surrounding, Shiva fell in the pit. Pleased saints then let a ferocious tier in that pit.

They thought that the tier would eat the man. But on contrary, Lord Shiva killed the tier and wear his skin and came out victorious.

The saints were shocked and realized that he isn’t an ordinary man and started worshipping him.

Ok…This story has left you all in Confusion. Does this story portray Shiva as an aggressive and inhumane person?

Well, don’t be confused. He is Lord Shiva. If he were that easy to understand everyone would have attained Moksh by now.

Lord Shiva is always immersed in his world. He represents the highest level of Spirituality. He is ignorant of worldly customs and beliefs. This world is momentary. It will exist at one time and demolished at another.

The story represents his Victory over Animal instinct. The tier represented the corruption and animal instinct of the saints. They were jealous of Lord Shiva and hence tried to murder him.

But he came out victorious and destroyed the corruption of Saints. He always keeps the poison for himself and lets the world have celestial juice.

He does this in this case. He wore the corruption and ill-feeling of the Saints. Thus liberates them.

Also Read: What does the “Karen” haircut look like?