Are you a short heightened person? Even after hanging, exercising, or consuming protein-rich height, your height didn’t increase an inch.

Do people call you Manley? Or, have you ever heard the term Manlet?

In this article, I am going to answer every question about Manlet. So stay tuned…

Discrimination of any kind is absurd and harsh. It is based on irrational and false prejudices. Whether it’s caste, race, class, or Height discrimination.

People are different. Each has its unique appearance, which they should cherish. Like fingers, humans have to be different to fit in their respective roles.

But Research proves that the human brain uses height as a factor to measure status and fitness. Though the truth is quite different and far from this.

Contrary to popular belief, height varies from person to person according to genetic coding, pituitary gland, nutrition, region, and exercise.

Even so, people often ignore these scientific facts and bully anyone different from average. Whether it is a short person or a fat person, they have to face discrimination.

Why do short people get bully?

Well, not only short but also tall people also are bullied. While short people are called by these insulting slangs: ‘manlet’, ‘Shorty’, ‘Pokémon’, etc.

Any person who is different from average has to face discrimination.

The word manlet is an offensive term used to denote a short muscular man. By short, it means any person below average height.

They are short people who had built on extra muscles to compensate for their height.

The word manlet is made up of two words: Man + Let. We often use let suffix to denote someone smaller. For instance, piglet, owlet, booklet, and many more. And so is the case with Manlet.

Anyhow this is a discriminatory term and thus you should not use it in any case.

Origin of the word Manlet 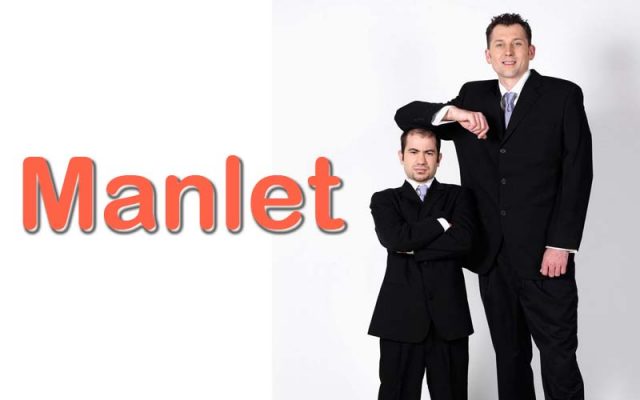 The use of the word Manlet as an insult was by a Woman. In 1903 Lizzie Allen Harker in her book A Romance in the Nursery refers to her character as manlet.

She describes this character as a little sandy-haired, feebly joking manlet with fat and soft hands.

However, Today You will not find any writer using this word. It is often used to insult people over the internet.

At what height range would you consider a ‘manlet’?

Manlet is not a scientific word. Therefore, there is no fixed definition of a Manlet. According to popular belief, any muscular male below 6’ is a Manlet. Anyone below 6 says even 5 11 is not considered as average.

According to the Who census, the average height of a male in the world is 5 10. Therefore, it’s quite difficult to reach a certain height for a manlet.

Nevertheless, you should never forget Manlet is a discriminatory term. Following any kind of discrimination or bullying, someone is punishable. If reported you will have to face severe consequences.

Even if someone calls you Manlet you should not react aggressively. Rather try to deal with the bully calmly and report him.

Whether you are short or tall, fat or thin, fair or dark, don’t let the world judge you. Love yourself the way you are.

You are unique and remember it. Even a swan is discriminated against among ducks. Thus, embrace your uniqueness.

Also Read: Who is the mother of Metal Lee and Rock Lee’s wife?